Community Invited to Join in the HemisFair 40th Anniversary Celebration

On Sunday April 6, beginning at 12:30 p.m. prior to the opening of My Coke Fest™ at the NCAA’s The Big Dance®, the City of San Antonio and the HemisFair 40th Anniversary Committee invite you to a day of celebration under the entry arch located in HemisFair Park on South Alamo Street.

A brief ceremony to commemorate the opening day of the fair that changed San Antonio will begin promptly at 12:45 p.m. Members of the original executive committee will be in attendance, and tribute will be paid to those individuals and to the fair’s legacy. Tom Frost will serve as master of ceremonies and Peter Holt, owner of the San Antonio Spurs, will be the special guest speaker. County Judge Nelson Wolff, Councilwoman Mary Alice Cisneros and City Manager Sheryl Sculley are expected to attend.

At the ceremony’s conclusion, guests will be invited to follow the Jim Cullum Jazz Band to the UTSA’s Institute of Texan Cultures’ opening of the year-long exhibit, HemisFair 1968: San Antonio’s Introduction to the World.

In celebration of HemisFair’s 40th Anniversary, the Tower of Americas will offer free rides to the observation deck and a stage will be set up at the base of the Tower with performances and entertainment throughout the day.

The celebration of HemisFair Park would not be complete without recognition of the corporate support that existed in the community at the time. One of those corporate citizens – Coca-Cola, an original sponsor of HemisFair 1968 - returns 40 years later to add festivities to the celebration. To help mark the place where San Antonio was put on the world map, Coca-Cola is sponsoring My Coke Fest™ on Sunday --a day featuring popular musical entertainment and celebrities. My Coke Fest™ is part of The Big Dance®, a four-day entertainment extravaganza being held in conjunction with the NCAA® Men’s Final Four® basketball tournament on South Alamo Street, directly under the entry arch to HemisFair Park.

Everyone is welcome to come to HemisFair Park to celebrate its 40th anniversary. 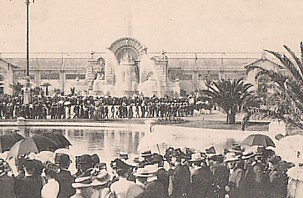