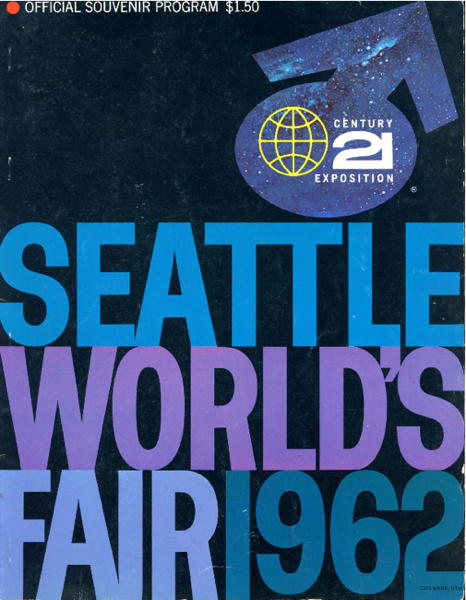 WELCOME TO THE 1962 SEATTLE WORLD'S FAIR

Spread across the fair's site is a glittering world of the future, an animated jewel mined from the intellect and creativity of scientists, artists and men of vision.

Visitors of all ages and interests will line something to amuse and entertain, to stimulate and challenge them in this panorama of tomorrow dedicated to man in the space age.

Rising six hundred feet above the grounds is the Space Needle, symbolizing the fair's thrust into the new frontier of space.

The fair had humble origins. It first was conceived us a festival of the West, a modest presentation commemorating another fair—Seattle's 1909 Alaska-Yukon-Pacific exposition.

Seattle was planning a new civic center and it and the fair project were joined in a union which spurred the fulfillment of both. The Washington Legislature also invested millions of dollars in the project and the land and buildings were made available for the fair. It then became known as the Century 21 Exposition.

What began as a festival blossomed into a full-Hedged world's fair in November, I960, when the Bureau of International Expositions accorded Century 21 that classification and authorized participation by its thirty member nations.

The fair is divided mm the major theme areas designated by the colors on the map.

The World of Science is embodied in the United States Science Pavilion, a complex of buildings at the south end of the grounds, and in the nearby National Aeronautics and Space Administration Pavilion. The visitor passes through live areas in the Science Pavilion, including the House of Science, the Development of Science, the Spacearium, in which he takes a simulated rocket ride through space, the Methods of Science, and the Horizons of Science, which dramatizes the role of science in the world of tomorrow. In addition, there is a "doing science" laboratory for young people and a science theater.

The World of Century 21 awaits in the Washington State Coliseum, at the west entrance to the grounds. The building encloses the state's theme show, a dramatic concept of 21st century man's environment presented in a unique cube structure rising above the Coliseum floor. On the floor level are industrial and governmental exhibits, all contributing to the image of the future.

The World of Commerce and Industry has two hemispheres—domestic and foreign. The domestic exhibits, all keyed to the contributions their sponsors are making toward the world of tomorrow, are located around Friendship Mall, Boulevard 21 and American Way.

An impressive array of foreign exhibits making the exposition a world's fair in fact as well as name—is located around International Plaza, in the International Mall and in the Boulevards of the World.

The World of Art has a prominent place in the fair because man's cultural achievements are no less important in his overall development than his scientific progress. The World of Entertainment offers a broad range of events in the Opera House, Arena, Playhouse and Stadium.

The spectacular in entertainment revolves around Show Street and the gayway, the bright lights section in the northeast corner of the grounds.

These are hut the foundations of the exposition. On them rises the most stimulating world's fair ever staged, dedicated 10 the future and designed to provide insight to tomorrow.